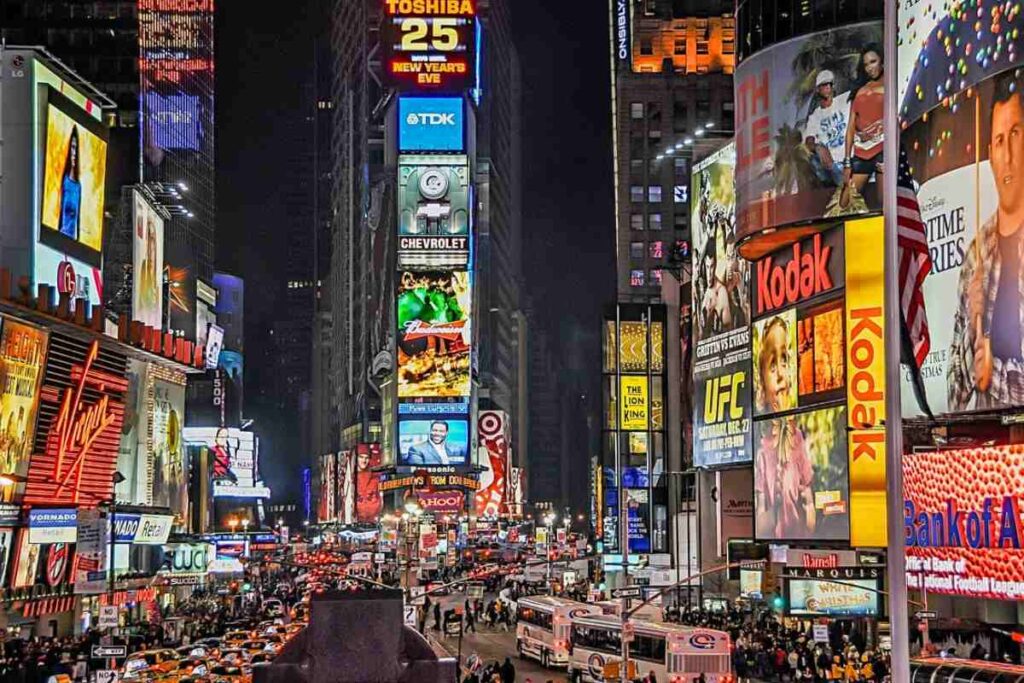 Advertising… Omnipresent in today’s society, it is an essential part of our economy. Sometimes praised, sometimes hated, advertising occupies an important place in everyone’s life, whether at work, leisure or private life.

A brief overview of advertising to fully understand its definition, the issues, and also, of course, the benefits.

What is the Definition of Advertising?

The word advertising implies several definitions. First, it is the way for a company or a brand to communicate with its customers, whether to announce a new product or promote the company’s image.

Advertising also consists of paying for space to publicize a product, an event or an idea. It is present in the public area, in the media, on the Internet…

We can also talk about advertising in the broad sense as a strategy to get people talking about a concept and give it a good reputation. The types of media, as well as the objectives of advertising, are very varied and constantly evolving.

The History of Advertising

Advertising has more or less always existed. We can, however, say that before, it passed by word of mouth.

The best salespeople knew how to promote their products to attract the maximum number of customers. In the 15th century, the invention (re-invention) of the printing press by Gutemberg marked an important advance in advertising.

Indeed, the discovery of printing made it possible to considerably increase the number of advertisements, formerly written and painted by hand. In 1625, the British newspaper Mercurius Britannicus signed the first advertisement in the media.

Advertisements are taking an increasing place in society, following the industrialization of countries. Companies want to publicize their products and discover the power of advertising in the minds of their fellow citizens.

The goal is no longer to present its activity but to arouse the desire and the desire to possess among consumers.

Advertising became more professional with the creation of the first agency in 1841. Volney Palmet, a visionary at the time, founded his advertising agency in Philadelphia, in the United States.

It’s a revolution: companies are no longer obliged to take care of their advertising themselves but can delegate this task to professionals. Advertising thus becomes a profession in its own right, which will later give birth to graphic designers, marketing specialists, web designers…

If advertising becomes common in newspapers and on the radio, the democratization of television in homes marks its advent.

The commercials are gradually sold more and more expensive as they reach more and more viewers. Some advertisements mark history and are known internationally.

The arrival of digital advertising is another revolution. Merchant sites, social networks, newsletters…

The forms that advertising can take are multiplying.

The Image of Consumer Advertising

Nowadays, advertising has a somewhat controversial image among the general public. We cannot deny that it is present at every moment of our lives and that it is difficult to escape.

On the one hand, people often complain of being bombarded with advertising images: when they drive in town, turn on their television or radio, surf the Internet…

Some think that advertising is superficial and makes us want trivial things people don’t need. Carl Sagan, the American scientist, even said:

“Advertising encourages people not to trust their judgement; it teaches them to be stupid”.

The impact of advertising on children, vulnerable targets, is also often singled out.

Happening it must be recognized that everyone finds his account.

Who has never clicked on an ad for a discounted item of clothing that caught their eye?

Who has never visited a new store after seeing an advertising poster?

Finally, who has never taken a flyer distributed in the street hoping to have an exciting reduction?

Advertising, therefore, fulfils its primary objective, which is to produce desire in the consumer. It is part of our lives and has allowed trade to flourish, thus strengthening all economic sectors.

It is the art of communication taken to its climax.

Today’s advertising presents a different face than the leaflet passed from hand to hand in a hurry. The professionalization of the profession and the creation of advertising agencies have made this field quite sought after.

Some prizes reward the most aesthetic and creative advertisements. Companies compete in imagination to attract the customer’s attention and produce funny, spicy, daring advertisements…

Advertising has indeed found its letters of nobility.

Distant from being a simple means of communication for companies, advertising is also a natural social phenomenon. Historians and sociologists consider that observing the advertisements of a particular period says a lot about the mores of the time.

Indeed, advertisers know that they must stay as close as possible to people’s concerns to succeed in reaching them. By following the news, they stick to trends and topics that interest citizens.

By being close to customers, they can sell their products to them. Advertising is, therefore, a formidable mirror of an era in a given place and time.

Advertising is the exact reflection of fashion trends, habits, desires, needs, and the fads of a population during a given time.”

If advertising has become so prominent, it’s not for nothing. We live in a society of extreme competition.

Companies, therefore, have every interest in standing out from each other to win over their customers. Advertising offers a unique opportunity to stand out and appeal to consumers directly in their daily lives.

Apart from VSEs, most companies allocate a substantial part of their budget to advertising. And it works: everyone knows the Nike logo or the Decathlon slogan, for example.

One would think that the large multinationals which brew billions of dollars do not need to advertise. However, it is by forging a visual identity and regularly reminding their customers that they manage to stay at the top.

Branding is the most important thing a business can have these days.

The Psychology used in Advertising

Good advertisers are far from just merchants. They have notions of psychology, history, economics, art…

Above all, they know people’s behaviour and knowledge through which cognitive means they can reach them. Through colours, shapes, fonts, illustrations….

These professionals can grab your attention and get you on board with a message. This can pass for manipulation and therefore displeases some people.

However, thanks to our high knowledge in terms of brain psychology, we now know how to do these “magic tricks”. Advertising has learned how to use these skills to evolve.

A marketing strategy must be developed for an advertisement to reach its audience (this is called “targeting”). First of all, the company must carry out a study to define the target:

The bundle of this knowledge will make it possible to establish an effective strategy. A creative debriefing is conducted so the client can state their terms and guide the advertising team.

The creative has an essential role since he will translate the company’s message into images.

The different forms and media of advertising

Advertising can take many forms. The most classic advertisements use the media, while the most confidential take alternative routes.

It is also necessary to differentiate between BtoB (Business to Business) advertising and BtoC (Business to Consumer) advertising. The first is aimed at professionals and companies, while the second is at individuals, also called consumers.

They were the ones that were used for the very first advertisements. Despite the advent of the web, the written press is still a vital advertising vector today.

A significant part of the population reads newspapers, magazines and other printed matter. In addition, articles are often picked up on the Internet.

Advertising in the press is done through the purchase of space and press releases, and promotional items. When providing information, journalists can also indirectly advertise a company.

It’s the same principle for radio and television. Certain television moments are eagerly awaited by companies, for example, the interludes between two series episodes.

Advertisers know that many won’t want to turn off the television for fear of missing the next episode and will be very receptive. We can also take the example of the Super Bowl, a significant event in the United States which covers more than 70% of the audience share.

In 2017, the average price for 30 seconds of advertising during a Super Bowl game was… five million dollars! However, the media are not all good for businesses.

They can give “bad publicity” to a company by reporting its news (health scandals, items, financial information, etc.). It can even lead to power games.

The Internet is an excellent vector for advertising. Its biggest advantage? The diversity of usable formats (video, image, text, sound, gif, etc.).

Currently, almost everyone has access to the Internet and is, therefore, receptive to advertisements. Using cookies and other marketing strategies makes it possible to offer personalized advertising to each Internet user.

This is an opportunity for companies to get into the heart of people’s lives and to have a modern and friendly image. Community managers, for example, manage the brand image of companies on social

Queen way of [advertising], billboards still have a bright future. Posters can be used on many media: bus shelters, signs in town or on the side of the road, stations and other places of public transport, etc.

Print [advertising] is also a safe and effective way to get people talking. These include flyers, brochures, leaflets, business cards, catalogues, placemats, etc. Street -marketing is also the art of bringing [advertising] directly into people’s lives in the middle of the road.

As a general rule, the world of [advertising] is closely linked to that of entertainment. Indeed, what interests and amuses people is likely to be seen and, therefore, bring in money.

Contests, events, outings, games, and matches are perfect opportunities for advertisers. Advertisers compete in imagination to associate their names with exciting events.

Take, for example, the energy drink brand Red Bull. In 2012, she shot a commercial filmed live… the first free fall jump from the stratosphere.

5 Ways to Bring Value to Your Business Database

Watch Harry Potter and The Chamber of Secrets [2020] 123movies

What is Administration? And it’s Career Opportunities.

Top 5 Affiliate Marketing Tips of the Year by Experts

What You Should Know About IRA Taxes

Make Your Business Thrive in a Tough Economy